Why the Simplot Games are so special

What makes the Simplot Games in Pocatello so special?

For one, the annual high school track and field event is an open meet, meaning athletes do not need a certain qualifying time or distance to compete. It is open to everybody — even admission to watch the games at Idaho State University’s Holt Arena is free.

Thirdly, the event also attracts some of the biggest names in Olympic history. Young competitors in the past have gotten a chance to mingle with Olympic gold medalists such as Andre Phillips and Stacy Dragila.

Since the first time the event was held in 1979, the Simplot Games have become one of the premier high school indoor track and field events in the United States. Every February, thousands of athletes fill the Holt Arena on Idaho State University’s campus to get a chance to compete and hopefully stand on the podium victorious.

But the J.R. Simplot Company-sponsored event is about more than just about crossing the finish line, as evidenced during the Simplot Games held in February of 2016.

A regular tradition of the games is the “Breakfast with Fosbury and Friends,” where the visiting athletes, dignitaries and Olympians get a chance to meet and mingle.

The breakfast is named after high jumper Dick Fosbury, who won a gold medal in the 1968 Olympics and is a member of the U.S. Olympic Hall of Fame and the U.S. Track and Field Hall of Fame. He is also an executive board member and past president of the World Olympic Association.

He developed the Fosbury Flop and employed the move to win the gold. The technique he perfected is still taught and utilized today.

In fact, Steve Hooker, who earned a gold medal in the pole vault during in the 2008 Olympics in Beijing, said as a high school athlete he worked to perfect the Fosbury Flop.

“I was just star struck when I met Dick Fosbury,” Hooker said.

Hooker, a two-time World Champion and a past Olympic record holder, was the keynote speaker during the breakfast that was held on Friday, Feb. 19, 2016.

His career in the pole vault was launched when he was 18 years old, and he competed in the World Junior Championship. He finished fourth and was on top of the world, but the next four years were not good. Injuries sort of mentally crippled Hooker.

He didn’t even qualify in Athens in 2004. But he said the trip turned out to be a rewarding learning experience.

“The best pole vaulters in the world were there, and I had an opportunity to watch them,” Hooker said. “The hardest period of your life is when you go from competing as a kid to competing as an adult.”

However, the 2008 Summer Olympics in Beijing were a completely different story for Hooker.

Under dramatic circumstances, he twice cleared clutch jumps on his third attempt in the final, before clinching the gold medal with yet another third attempt clearance at 5.90m.

With the gold medal secured, he went on to break the Olympic record with another third and final heart-stopper at 19-feet, 6.5 inches.

“It was almost like an out-of-body experience,” Hooker said.

In 2009, Hooker continued defeating world-class fields in New York, Boston, Paris, the Ukrainian city of Donetsk, Stockholm, Sydney and Melbourne before claiming gold at the IAAF World Championships in Berlin.

That win was difficult considering Hooker tore his thigh muscle in training 12 days prior to the final. 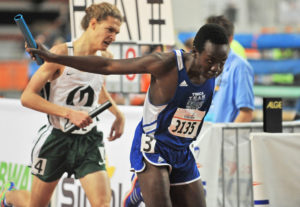 Ali Phillips has seen both sides of the Simplot Games.

First, she saw it from a Pocatellan’s perspective. Phillips lived in the Gate City for five years and competed at Simplot as a Highland Ram before moving to the Treasure Valley and spending her senior year of high school at Rocky Mountain High School in Meridian.

That’s when Phillips saw the games from a different angle, from the perspective of someone who doesn’t have the Simplot Games in their own backyard every year.

“(In Pocatello), we just grow up seeing that. We’ve been around the athletes,” Phillips said. “But in Meridian and in Boise, it’s a big deal to come and compete and to do well. … It’s cool to see how people on the other side of the state, how other people see the Simplot Games.”

For Phillips, it’s just another Simplot Games, a chance to compete with some of the best athletes in the country. The weight and impact of the games isn’t lost on her, but in the eyes of other competitors from outside Pocatello, the Simplot Games carry a different level of prestige.

For Hope Fuller of Weiser High School, a Simplot Games first-timer, the event was a whole new adventure.

“It’s so mind blowing,” she said. “I go to a really small school. … It’s kind of awesome to come here and compete with all these amazing people from all over the world. I’ve never been able to do this, so I’ve really enjoyed this experience.”

Because of the magnitude of the Simplot Games, many athletes are meeting for the first time. Many — including Phillips and Fuller — are thrown on to the same team and don’t have much time to learn about each other until the starting gun sounds.

And because of this, the Simplot Games make forming special bonds on the fly easy. Eagle High School’s Billie Gardner, also a member of YMCA Team Idaho, remembered what it was like at the Simplot Games last year when she competed with members of a track and field team from Alaska.

“Last time I was here, the whole entire Idaho (team) got a picture with the Alaska team, and that was really cool because we’ve never met these people before,” Gardner said. “But we were able to come out for a sport that we all love and just enjoy it. Meeting other people, competing with people of varying levels, it’s an eye-opening experience.”

Bonding over track and field doesn’t just happen between two states. Those same friendships can be forged between athletes from rival schools in Idaho as well. The YMCA Team Idaho boys 1,600-meter spring medley relay team won its heat too, with Mountain View’s Charles Paul edging his opponent in the final 100 meters. And though he’s on a relay team with athletes he may compete against when the outdoor high school track and field season gets underway in the spring, right now, they’re his teammates.

“In school, these kids might be your rivals,” said Emmett’s Chase Armstrong. “(Simplot Games) brings you together with people you don’t know.”

A Visit from Carl

If Carl Lewis wanted to stay under the radar during his trip to Pocatello, he didn’t do a very good job. At least not on Saturday, Feb. 20.

The nine-time Olympic gold medalist sported a bright red University of Houston jacket while taking in the Simplot Games at Holt Arena. He was announced to the crowd by fellow Olympic gold medalist Dick Fosbury during Saturday’s opening ceremonies. And he watched the games from the VIP seating area, when he wasn’t being mobbed by admirers of all ages.

“We had to talk him into getting introduced,” said Andre Phillips, who won the Olympic gold in the 400-meter hurdles at the 1988 summer games and has attended the Simplot Games for more than a decade.

Lewis flew in to Salt lake City two days earlier and made what was, to most, a surprise appearance in Pocatello.

“I wanted to experience it,” Lewis said.

Lewis joined the coaching staff at Houston in 2013 and coaches men’s sprints and men’s and women’s horizontal jumps for his alma mater. He spent part of the day Saturday watching UH signee Samiyah Samuels compete in the long jump — the sport in which Lewis holds the indoor world record at 8.79 meters (28 feet, 10.06 inches). Samuels finished second in the event.

The 2016 edition of the Simplot Games was Lewis’ first in attendance, and he noted the particulars of the event’s setup, which features a wooden, 200-meter track with raised banks and enough seating for close to 12,000 people.

“I like the track,” Lewis said. “It’s uniquely different. They used to all be wooden tracks. It’s nice to see one again. And it’s a great setup. It’s easy to see. The fans can really see the field well because you’re back far enough you can see everything.”

Multiple record-breaking performances occurred with Lewis in attendance on Feb. 20. And coupled with the fact that the Games have grown to include athletes from Canada, Mexico and Australia, one of the world’s greatest was taken aback by the level of competition in small-town Southeast Idaho.

“The talent’s tremendous,” Lewis said. “You have quite a few No. 1-in-the-nation performances. … So I think the competition’s tremendous.”

As Lewis tried to ease away near the conclusion of Saturday’s events, he couldn’t go unnoticed. The bright red jacket and beaming smile wouldn’t go ignored.

Bingham Memorial Hospital At A Glance

Portneuf Medical Center At A Glance

Portneuf Medical Center in Pocatello. Eastern Idaho is a special place. For the people who live here, looking out for your neighbor is...

Guide to Arts and Culture in the Gate City

The Pocatello/Chubbuck area has a thriving arts and entertainment scene, with plenty of opportunities to listen to live music, catch a play...

Sumisu. The Pocatello/Chubbuck area has a vibrant restaurant scene, with plenty of local eateries to satisfy any palette. Whether...

Why Southeast Idaho is an outdoor paradise

To say the Pocatello/Chubbuck area is an outdoors paradise is an understatement. With countless miles of trails, plenty of fishing holes...

Tom Claycomb: Backpacking is the life